How Can You Get Pregnant With PCOS: Symptoms, Causes, and Diagnosis 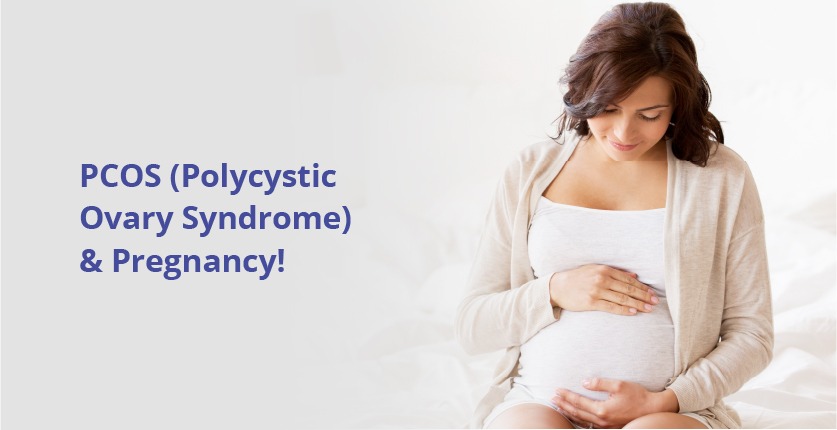 Polycystic Ovary Syndrome, more commonly known as PCOS, is a hormonal disease in women of reproductive age. It is fairly common but undiagnosed and unmanaged in most affected women; roughly 1 in 12 women have it.

The name is a misnomer in the sense that PCOS is an endocrine and metabolic disorder that affects the body well beyond the ovaries – not everyone with the syndrome has ovarian cysts, and not every cyst in the ovary is a sure sign of PCOS. Researchers have been arguing to rename the condition to “Metabolic Reproductive Syndrome” or a more appropriate name to avoid confusion.

Its three main features are :
1. High levels of androgens (male sex hormones)
2. Cysts in the ovaries, although not always and
3. Irregular or skipped periods

Some women start seeing symptoms around the time of their first period. Others only discover they have PCOS after they’ve gained a lot of weight or they’ve had trouble getting pregnant.

The most common PCOS symptoms are –

1. Irregular periods. A lack of ovulation prevents the uterine lining from shedding every month. Some women with PCOS get fewer than eight periods a year.

2. Heavy bleeding. The uterine lining builds up for a longer time, so the periods you do get can be heavier than normal.

3. Hair growth. More than 70 percent of women with this condition grow hair on their face and body — including on their back, belly, and chest. Excess hair growth is called hirsutism.

4. Acne. Male hormones can make the skin oilier than usual and cause breakouts on areas like the face, chest, and upper back.

5. Weight gain. Up to 80 percent of women with PCOS are overweight or obese.

6. Male-pattern baldness. Hair on the scalp gets thinner and falls out.

7. Darkening of the skin. Dark patches of skin can form in body creases like those on the neck, in the groin, and under the breasts.

Doctors and researchers do not exactly know what causes this disorder. Therefore, it’s advisable to get checked early on when you think you’re beginning to show signs of PCOS. It is said that insulin resistance, genes, and inflammation have all been linked as primary causes of this disease.
1. Insulin Resistance
More than 70% of women suffering from PCOS have displayed insulin resistance. This implies that the body’s cells aren’t able to process insulin properly.
When the body is unable to get enough insulin, it demands more insulin leading to the pancreas generating more than necessary. This excess insulin triggers ovaries to produce androgens.

2. Genes
Due to clustering of the disease among families, scientists believe that it’s highlyassociated with one’s genetic composition. If your immediate family members have had PCOS in their lifetime, there is a chance that you might have it as well. We don’t yet know which specific gene is the reason, it could very well be a cluster of genes.

3. Inflammation
Higher levels of inflammation in the body is also commonly seen among women with PCOS.

There are a couple of different criteria and methods to diagnose PCOS.

1. Rotterdam criteria
Under this criteria, PCOS is diagnosed based on the presence of irregular ovulation, high androgens (male sex hormones), and/or polycystic ovaries.

2. Androgen Excess and PCOS Society (AE-PCOS)
PCOS cannot be diagnosed unless both high androgens and ovulation dysfunction are present. The AE-PCOS criteria do not permit diagnosis based only on irregular ovulation and polycystic ovaries.

How to get pregnant with PCOS?

Since PCOS causes irregular periods and interrupts the normal menstrual cycle, it makes it harder to get pregnant. Most women with the disease have fertility issues and it decreases the chances of conceiving. However, the chances of getting pregnant with PCOS can be enhanced with the right treatment. IVF is considered a good option for patients suffering from infertility caused by PCOS.

Some of the necessary steps that doctor usually suggests on How to Get Pregnant with PCOS are:

1. Letrozole- this drug has been recognised as the first-line treatment for PCOS to induce ovulation.

2. Clomiphene Citrate (CC): It is the standard medicine suggested for ovulation induction in women with PCOS. After the medicine is given, ovulation is successfully achieved in women with PCOS problems, and thus help them with timely menstruation, and improved conception chances. Non-obese women or those obese women who do not ovulate even after lifestyle changes are suggested to ovulation induction therapy with Clomiphene Citrate (CC). This increases the chances of conception with PCOS.

3. Metformin with Clomiphene Citrate (CC): For Insulin Resistant women, the combination of metformin and clomiphene citrate have been used and proven to improve the metabolic abnormalities in PCOS patients. It is also known to improve ovulation rates and help conceive pregnancy in women with PCOS.

4. Gonadotropin Therapy: Ovulation induction with gonadotropin therapy is recommended for many patients with PCOS. These help follicles to mature and eggs to ovulate.

5. Laparoscopic Ovarian Drilling (LOD): It is a surgical treatment of PCOS that can trigger ovulation in women. Although not commonly used, it is recommended to patients who fail to ovulate even after losing weight or trying medications. It is usually done with a small laparoscopic incision with general anaesthesia. This helps improve pregnancy chances in women.

6. IVF (In-Vitro Fertilization) Treatment: IVF is a procedure in which fertilisation takes place outside the body. The eggs are extracted outside the body by giving stimulation medications and then fertilised in an IVF lab. The Embryo form is transferred back to the uterus to implant. This increases the chances of pregnancy for women with PCOS.

Studies comparing diets for PCOS have found that low-carbohydrate diets are effective
for both weight loss and lowering insulin levels. A low glycemic index (low-GI) diet that
gets most carbohydrates from fruits, vegetables, and whole grains helps regulate the
menstrual cycle and is better than a regular weight loss diet.

If you think you have symptoms similar to PCOS/PCOD, do not panic but visit a trusted doctor. Sound medical diagnosis and advice is the best way forward. If you have PCOS/PCOD, medication and treatment can cure this condition. For more information on PCOS/PCOD or any fertility issues, book your appointment or call +91 124 4882222.